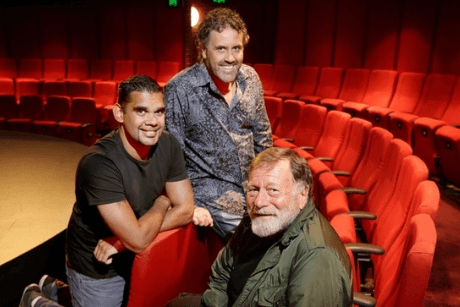 Legendary actor Jack Thompson settles into a perfectly lit theatre and launches a virtuoso performance praising a WA icon he claims is largely taken for granted.

Thompson, in Perth this week to receive an honorary doctorate from Edith Cowan University, yesterday turned his attention to the acting production line that is the WA Academy of Performing Arts, where his son Bill graduated in 2013.

“We have a cultural institution here in WAAPA like nothing else in the world,” Thompson said.

“It’s a jewel in the cultural crown of this country. West Australians should think, ‘Western Australia? WAAPA’.

“It’s time for Australians to wake up to the fact that we are as well known in the world for our endeavour in the performing arts as we are in any other area. Be proud of what you have already and encourage it to flourish.”

It was a striking monologue to set the scene for a lunch today at Crown Perth, where Thompson will thank financial backers of WAAPA through the newly established Jackman Furness Foundation for the Performing Arts, of which he is patron, and also call for new donors.

He said there was a glaring “need for extra funding to maintain the already established credentials of WAAPA”.

The 74-year-old also delivered a “feeding the camera” masterclass yesterday to third-year WAAPA screen acting students. He showed the tricks learnt during a career which has spanned nearly 50 years, after he started his working life as a cattle station stockman.

A decade after Thompson delivered a compelling speech in the annual Australian National University reconciliation lecture, his thoughts on the importance of the arts to indigenous Australians are starting to play out on WAAPA stages.

“The corroboree is about performance,” Thompson said.

“What they all have in common is the bungul (corroboree) and in it, the tale is told from the time they’re very young. It’s about hunting skill, identification skill, they’re telling the tale and becoming the creature. They are not all God-given natural actors, but it is a very powerful part of their cultural tradition.

“What’s happening here is a really exciting continuation of what has already begun to happen and I think it will grow to something quite extraordinary.”

The Jackman Furness Foundation, with support from the Andrew and Nicola Forrest-founded Minderoo Foundation, has approved funding for 12 special projects at WAAPA this year.

Included will be a play by leading playwright David Milroy to be performed by Aboriginal theatre students.

Rodeo Moon will focus on 1969 in WA’s North West in the weeks leading up to the Federal election contest between Gough Whitlam and John Gorton. The concept is that a travelling rodeo show and a Kombi full of hippies hit town exposing old and new attitudes to the changing face of Australia.

“I wanted to do a play that was right in that nub of it and captured all those things,” Milroy said.

“The WAAPA course is the best thing that’s ever happened to Aboriginal theatre. It’s really exciting and has to be one of the best in Australia, if not the best.

“They say WA is the most isolated place in the world, but I think the rest of the world is isolated from us.”

Thompson conceded an acting future was not going to be easy for his 25-year-old son.

“Would you want to be the sheriff’s son,” he laughed.